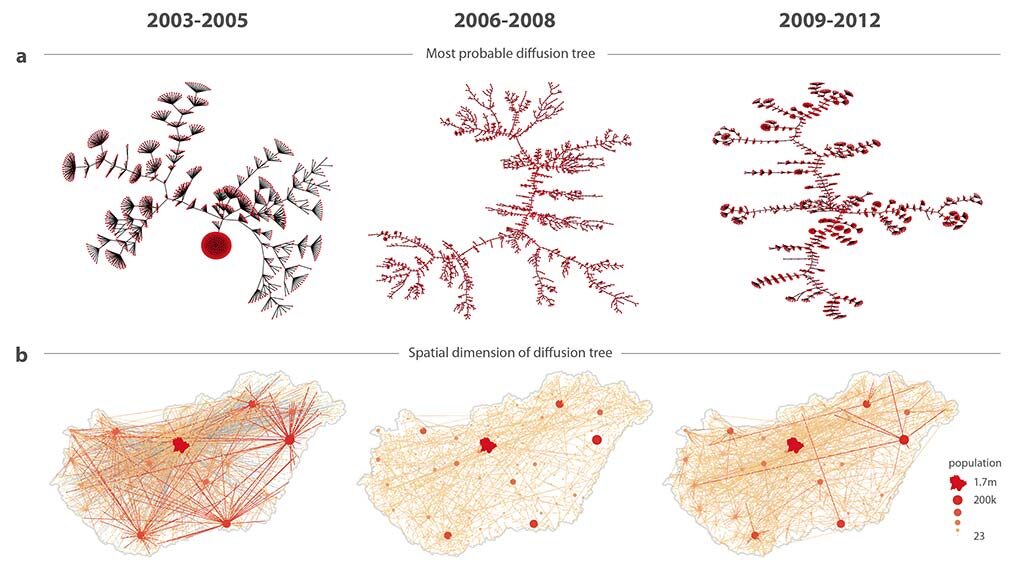 Urban hierarchy and spatial diffusion over the innovation life-cycle.

Successful innovations achieve large geographical coverage by spreading across settlements and distances. For decades, spatial diffusion has been argued to take place along the urban hierarchy such that the innovation first spreads from large to medium cities then later from medium to small cities. Yet, the role of geographical distance, the other major factor of spatial diffusion, was difficult to identify in hierarchical diffusion due to missing data on spreading events. In this paper, we exploit spatial patterns of individual invitations on a social media platform sent from registered users to new users over the entire life cycle of the platform. This enables us to disentangle the role of urban hierarchy and the role of distance by observing the source and target locations of flows over an unprecedented timescale. We demonstrate that hierarchical diffusion greatly overlaps with diffusion to close distances and these factors co-evolve over the life cycle; thus, their joint analysis is necessary. Then, a regression framework is applied to estimate the number of invitations sent between pairs of towns by years in the life cycle with the population sizes of the source and target towns, their combinations, and the distance between them. We confirm that hierarchical diffusion prevails initially across large towns only but emerges in the full spectrum
of settlements in the middle of the life cycle when adoption accelerates. Unlike in previous gravity estimations, we find that after an intensifying role of distance in the middle of the life cycle a surprisingly weak distance effect characterizes the last years of diffusion. Our results stress the dominance of urban hierarchy in spatial diffusion and inform future predictions of innovation adoption at local scales.